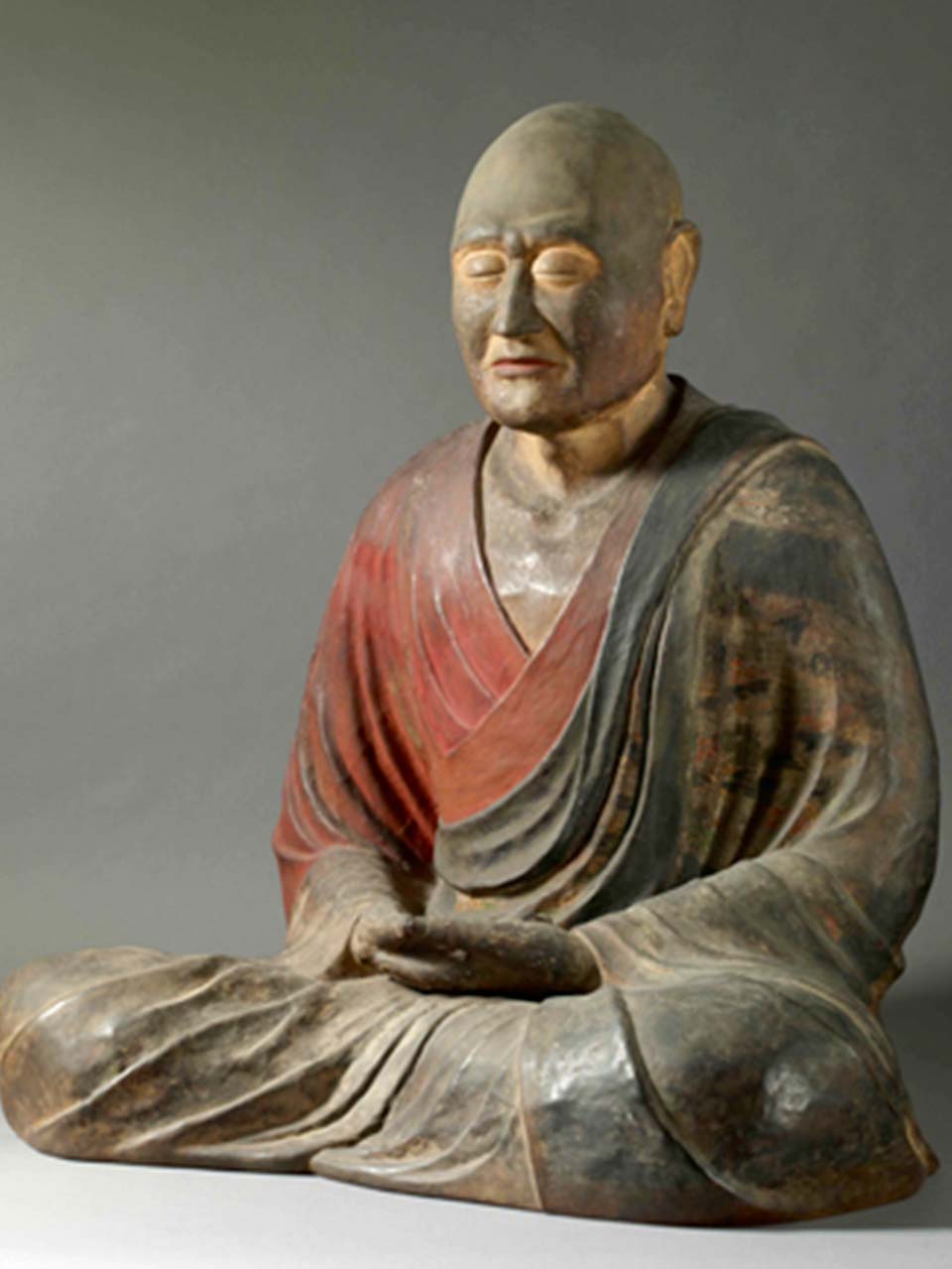 Sedentary Image of Ganjin Wajo
(Secret statue, opened to public for several days in the beginning of June.)

Toshodaiji Temple is located in what seems today to be the outskirts of Nara, but this area was a central block of the city when it was the capital of Japan about 1250 years ago. It was in 759 that the Emperor at that time granted the former residence of Emperor Tenmu’s son, Prince Neetabay Shin-no, for the establishment of Toshodaiji Temple. The name is derived from the facts that its first abbot Ganjin was from Toh, or the Tang Dynasty in China, and that it was founded as a place for Buddhist training under his guidance. Toshodaiji was the first temple in Japan to be devoted to one of the Chinese Buddhist denominations --- namely the Nanzan school. Even today Toshodaiji is regarded as the head temple of Japan’s Ritsu-shu denomination of Buddhist teachings.

As a high priest at Daimeiji Temple in China, Ganjin, who was to found Toshodaiji Temple in Japan in his later years, was invited by Emperor Shomu to teach the Chinese Buddhist precepts in Japan. He accepted this request, proving his dedication in a journey that took twelve years, five unsuccessful attempts and the loss of his eyesight before he finally crossed the ocean and arrived in Nara in 754. In Japan he had an ordination platform constructed in front of the Hall of the Great Image of Buddha at Todaiji Temple where he gave an ordination ceremony, which had long been awaited in Japan, not only to many Japanese priests of high standing but also to Emperors Shomu and Koken in person. Around that time, Japan was gradually forming itself into a Buddhist country, and we can say that it was the arrival of Ganjin that consequently completed this movement in Japanese history. His achievements were so influential to Japanese Buddhist and cultural history that he is to this day considered a figure of particularly distinguished services to Japan.

Resigning from Todaiji Temple, Ganjin had Toshodaiji Temple constructed and remained there for four years until May 6th, 763, when he passed away at the age of 76. Abbot Ganjin’s disciples, foreseeing his death, had had a statue of him (presently a National Treasure) constructed using the hollow-core dry-lacquer technique. Now this is enshrined in the Meay-do Hall of this temple which is opened to the public for just several days a year, including June 6th (which corresponds with May 6th, the anniversary of his death on the old lunar calendar) and also the day before and after. It is surely an inspiring experience to stand before and behold this magnificent statue. Japanese Buddhist culture was at its peak during Ganjin’s time, and the names of many other distinguished priests remain known. Although most of their graves are yet to be discovered, Ganjin’s tomb rests quietly amidst the eastern woods of the precinct of Toshodaiji; and it has continued to be worshipped for more than 1200 years.

There have been many changes in this temple’s long history. In its early days Toshodaiji commanded a total of 48 subsidiary temples in the Nishiyama Mountain vicinity. However, through various changes in the Japanese political and cultural climate, it has been reduced to its present state. Nonetheless, Toshodaiji presently owns 17 National Treasures and more than 200 Important Cultural Properties. This temple itself is certainly representative of the Japanese Tempyo Era culture of the 8th Century, and it is a temple beyond comparison.

The Nandai-mon (Southern Great Gate) was rebuilt in 1963 to commemorate the 1200- year anniversary of Abbot Ganjin’s death. Behind it stands the stately Kondo, or “Golden Hall (Main Hall),” which is the greatest Tempyo Era structure (of the 8th century) remaining in Japan today. The concise beauty of this Kondo, built more than 1200 years ago, is such that it has been written about in many famous old poems. The row of its pillars is reminiscent of the Parthenon of Greece. 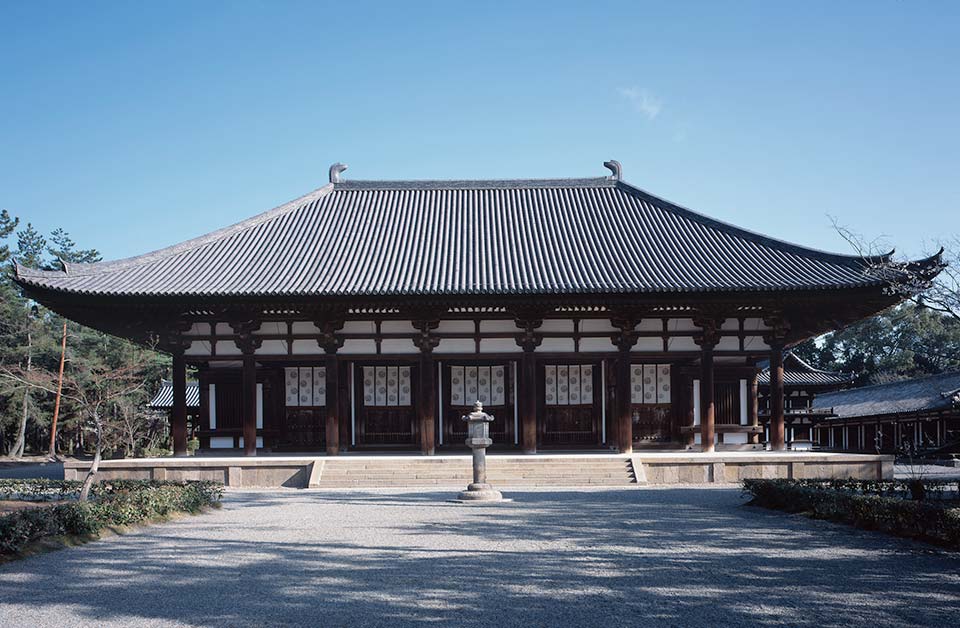 During the 8th Century, Buddhist temples were not only places for religious training but for learning in general; and the Kodo Lecture Hall was used as an assembly and lecture hall for all the surrounding temples. The Kodo had been originally constructed as an office building in the then Imperial Court complex, and the court gave it to Ganjin, wherein it was relocated to its present site. Today the Kodo alone has miraculously remained until today, while the then Imperial estate has been reduced to the 100 hectares of open space. 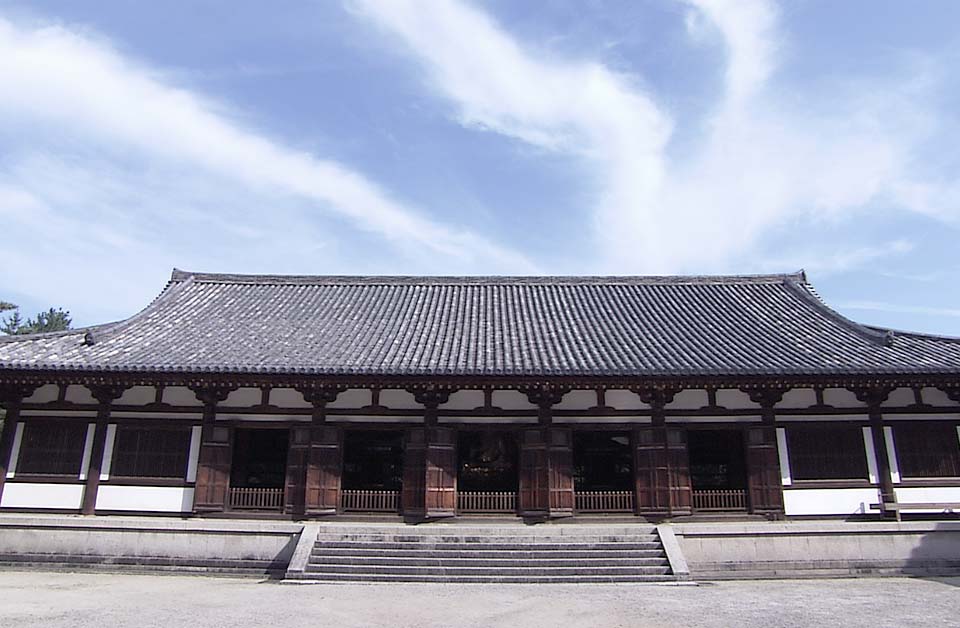 The Kodo Lecture Hall.
(One of the ancient, magnificant structures of Tempyo-Era)

In the east of the compound between the Kondo and Kodo is the only multi-storied building, the Koro (Shariden). It was built during the 13th Century, and every year on May 19th, it is the stage for the Uchiwamaki (Fan Scattering) Ceremony --- a ritual which began during that era as a symbol of reverence toward Abbot Kak-joh. The nuns of Hokkeji Temple who received his teachings would offer round fans to his grave. The fans have come to be shared among people by being scattered from the Koro. A special rite expressing gratitude and praise to the Buddha takes place on that day (May 19th), the memorial day of the founder (June 6th), and the time of the Shakanenbutsu-eh Ceremony (October 21st to 23rd).

The long large building to the east of the Koro is the remains of Higashi-muro created in the 13th Century. It was originally Sobo, or the sleeping quarters for the great number of monks in training at the temple. Its southern half has been rebuilt as a Rye-do (chapel).

East of the Sobo and Rye-do are two azekura, or wooden repositories. The southern one was for the storage of precious sutras, and the northern one for treasures. Both were built even before the famous Shoso-in azekura in Todaiji Temple which was constructed in 756. Toward the eastern end of the azekura, there is a modern version, Shin-hozo, which was recently constructed for the preservation of this temple’s precious old paintings and crafts.

The large building west of Ganjin’s tomb, the Meay-do, is an example of the housing and life style of the aristocrats around 1000 AD. Today, Abbot Ganjin’s statue is apotheosized there, being surrounded by the exquisite Fusuma-eh paintings dedicated to him by the great painter Higashiyama Kye-ee, who worked for 12 years and completed them in 1981; and as stated earlier, this Meay-do is open to the public on June 6th every year. Also, on the night of the full moon in autumn, ceremonial tea is served to this image and the precincts are lit up by many candles.

In the western section of the compound is an ordination platform. The magnificent three-tiered ordination platform is made of stone and is often compared with the earthen platform made by Ganjin at Todaiji Temple in the 8th Century. There used to be an eastern pagoda. It was lost in 1802, burned down when struck by lightning.

This pamphlet gives only a simple outline of Toshodaiji Temple’s background and structures. There’re many buildings and possessions designated as National Treasures or Important Cultural Properties, all of which are too numerous to be mentioned here. The precincts can be covered in approximately two hours, and its beauty is superb at any time of the year you may choose to visit.